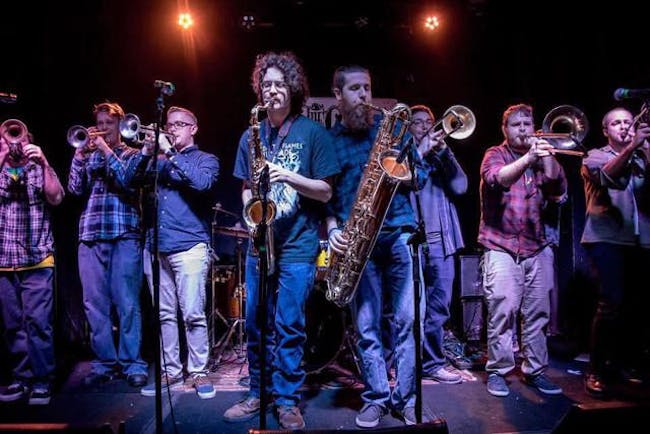 Audacity Brass Band is a ten piece brass band that uses New Orleans instruments and influences to create a rocking jam band sound with a funk-fusion twist.. ABB originated out of Farmville, VA and now is based out of Richmond. With all members composing, ABB’s style is influenced and includes; hip-hop, rock, blues, traditional jazz, or whatever they are feeling on stage at the moment. “We love the flair that Audacity’s style brings. Groovy, Funky, Tight, Audacity.” – Charlottesville Fan

Audacity was started by Sam and Tyler in April 2014, with the help of other musicians and friends at Longwood University. Once they found set musicians the group quickly started arranging and writing. Audacity played their first two years around Farmville, Virginia mostly around the campus of Longwood University. 2015 brought ABB’s first recorded demo, Bourne Salty. Good luck finding that. In 2016 Audacity Brass Band released their first album A101 and picked up residencies in Richmond, Farmville, and Charlottesville and began to travel outside of the Central Virginia area. In January 2018, the band released a deluxe single, The Salt Supremacy, that featured their anthem “Brap Attack”. Audacity releaed their second full length album, The Chemically Imbalanced, on February 7th 2019! The band kicked off their first full summer tour in April of 2019 with the LOCKN’ to ROCKN’ competition in Richmond, VA that sent them to the finals in Charlottesville, VA where they won a spot on the main stage at LOCKN’ 2019. In the midst of touring the band is currently working on new material and is excited to release their new single Serenity. Check the upcoming events below to see when they are #bringingtheparty to you!

Audacity has performed high capacity music venues such as: The Broadberry (Richmond, Va), Martin’s (Roanoke, Va), The Camel (Richmond, Va), The Whiskey (Wilmington, Nc) and was also won the 2019 Rockn’ to Lockn competition and will be performing at the 2019 LOCKN’ main stage