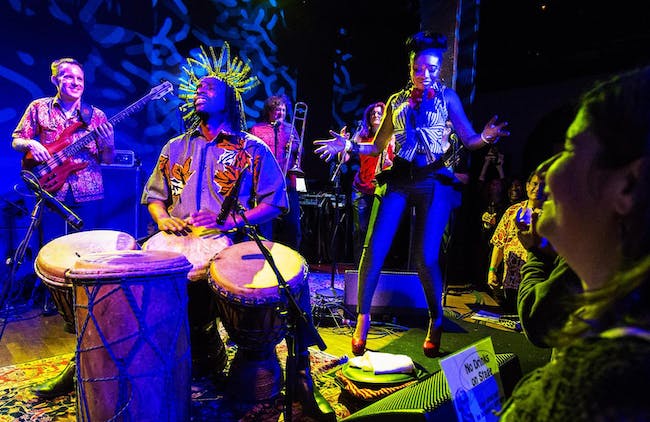 Seating is limited and is first come first serve

Tables are meant to be shared

Chopteeth is a 12-piece Afrofunk orchestra exploring the common groove between the funkiest, most hip-shakin’ West African and American popular music on the planet.

The core of the Chopteeth sound is Afrobeat: a big-band funk invented by Fela Kuti in 1970’s Nigeria. Afrobeat is a spicy stew of modern jazz, Yoruba tribal music and burning, James Brown-inspired rhythms.

Chopteeth’s sets feature original compositions along with updates of African dance classics, all while remaining true to the spirit of the music and its message. Band members step to the mic to serve up lyrics in a total of seven different languages.

Chopteeth, the "Crazy Fools of Afrobeat", called for rhythmic regime change on the band's award-winnnig 2008 debut CD, with its dynamic original songs. And in 2010, the band's live CD unleashed the power of Africa's Golden Age, featuring choice selections from Ghana, Senegal, Congo, Guinea, and Nigeria.

Since 2007, the members of the Washington Area Music Association have selected Chopteeth for a total of thirteen Wammie Awards, including Artist of the Year, Debut CD of the Year, World Music CD (twice) and World Music Group (for the last nine years in a row).

Over the last ten years, Chopteeth has performed all over the country, from the cast party for HBO's "The Wire," to the Congo Square World Music Festival in New Orleans, to colleges and festivals in many different states. The band can be seen regularly at top venues in Washington, DC, Baltimore and Virginia, including The Kennedy Center, The Smithsonian, The Music Center at Strathmore, Carter Barron Amphitheatre, The 9:30 Club, The Black Cat, Rock & Roll Hotel, Iota, Blues Alley, The State Theatre, and The 8x10 Club.

"This band is a monster. If you like being blown away they will more than oblige: your soul will be lifted, and a shit-eating grin will be all over your face"

"The band has become a local sensation—the dozen-plus member outfit cooks up a scintillating stew of Afrofunk, rumba, salsa, ska and funk. The group's live shows have been known to make even the most motionless of concert-watchers flail their limbs and do something that resembles dancing .”

"In a city with a celebrated funk scene and distinct go-go tradition(Washington, DC), Chopteeth’s brand of Afrofunk is the pulse of the city"