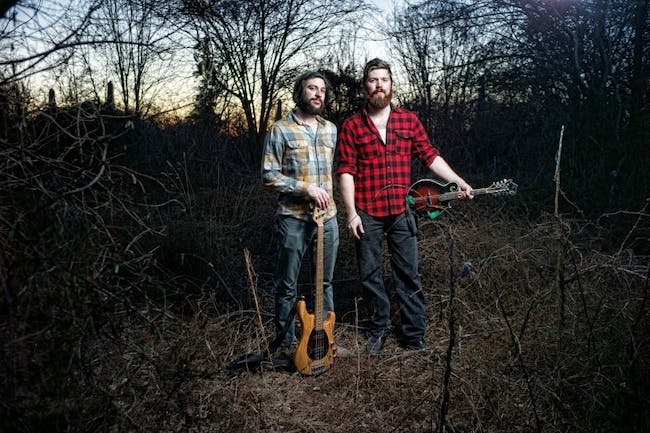 iCal
Google
This is a FREE show. NO Tickets are required for this show. Seating is limited & first come first serve.

Bassist Bobby Szafranski first lent his velvet touch to the back-handed poetry and full-throated ruckus of mandolinero Owen Lyman-Schmidt’s solo work in 2013. Since then the duo has been leapfrogging their way up and down the East coast bringing their unlikely sound to bars, living rooms, roof tops, and back alleys. Scavenger’s Joy, Driftwood Soldier’s 2015 debut, established their musical range for audiences everywhere, with two-thirds of the songs receiving radio play on dozens of radio stations around the country including WFUV, WNCW, and WXPN, where Bruce Warren called the duo “a bluesy version of Nick Cave with a nod to Tom Waits.”In early 2017, they followed the breadth of Scavenger’s Joy with the focused intensity of Blessings & Blasphemy, a concept EP exploring the tension between spirituality and dogma by reinterpreting gospel traditionals alongside anti-religious originals. With their next full-length record, Stay Ahead of the Wolf, waiting in the wings, Driftwood Soldier is still out on the road bringing their liver-shaking live show to audiences both devoted and unfamiliar. This isn’t some nostalgic reproduction of an imagined past, or a feel-good celebration of a rosy future. It’s a bittersweet love song to an imperfect world, a lullaby that leaves you bleeding. Find Driftwood Soldier, wherever they’re playing, and hear this new beast howl!

A broken-down van ranks pretty high on the list of worst-case scenarios for touring musicians. When it happened to Harper's Ferry, West Virginia band Mink's Miracle Medicine, though, it ended up being an important turning point for how they approach making music. Comprising Melissa Wright and Daniel Zezeski, Mink's Miracle Medicine are preparing to release Pyramid Theories, a new album the two began writing after their van broke down in Pittsburgh and they found themselves stranded for several days. That unintentional break gave Wright and Zezeski time to contemplate their shared musical philosophy, and they ultimately realized that they needed to make music for themselves, rather than trying to appease anyone else. When they got home, Wright immediately began writing what would become Pyramid Theories. Pyramid Theories follows the duo's 2017 debut album House of Candles. House of Candles was released to critical acclaim, premiering alongside a rave review on Noisey, which called the LP "a solid record that really establishes Wright and Zezeski not just as talented and articulate, but smart enough to be willingly vulnerable in a genre that doesn't tend to reward legitimate emotions." "I’d been writing a series of songs where they were all called ‘Pyramid Theories’ — there was ‘Pyramid Theories One,’ Two, Three, Tour, about ancient aliens and building the pyramids, and theories on humanity," Wright says. "That was happening while I was writing the songs on the record. So it spoke to the era."

Pyramid Theories opens with the title track, which, with its slow-burning bass line and fuzzy, almost droning guitar, gives off '90s riot grrrl vibes while pontificating on ancient Roman architecture. That track is followed by "Page of Me," which, again, features some '90s hallmarks, but this time — thanks to some steel guitar and jangly piano — recalls the alt-country of early Wilco and Uncle Tupelo. In less capable hands, such disparate sounds on one album would make for a disjointed listening experience, but Wright and Zezeski find cohesion in the strength of their shared musical voice. "'Page of Me' kind of laments being older and being in love with the idea of your younger self," Wright says. “I finished the bridge where I’m talking on the way to a show and put it in when I got there. I literally saw a hubcap hanging on a fence and threw it into the song."

Another album highlight comes later in the track list in the form of "Born Again," a laid-back seeming folk rocker that takes thoughtful stock of how one's birthplace can so heavily affect the outcome of the rest of their life. As Wright and Zezeski explain, that song is actually several years old, and, though Pyramid Theories marks its first appearance in recorded form, has become a fan favorite at live shows over the years. Both Wright and Zezeski, who met five years ago in the green room of a Hackensaw Boys concert, have deep musical roots. Wright studied vocal performance at Berklee College of Music in Boston before eventually moving back to West Virginia, where she also teaches music lessons. A furniture maker by day, Scranton native Zezeski cut his teeth in punk and ska bands as a teenager, eventually leaving home to hop trains and ride the rails with his Epiphone Hummingbird guitar in tow. Together, Wright and Zezeski have opened for acts like Woody Pines, the Hackensaw Boys, YARN, Jubilee Riots, and Gallows Bound. They currently live in a singlewide trailer on the Shenandoah River. Wright wrote the bulk of the album on that singlewide front porch, during what she describes as "a writing sprint" where she wrote daily. They recorded the album over two weekends in the Poconos. "It was really icy when we were recording," Wright says. "There were times when the icicles hanging off the barn we recorded in were a few feet long. There was ice packed onto the staircase, we had to be really careful coming up and down. We drank about 6 pots of coffee between the three of us every day." Both the writing and recording of Pyramid Theories hewed closely to the duo's new philosophy, which found them following their instincts rather than trying to write songs that fit any preconceived idea or genre mold. As a result, Pyramid Theories sounds fresh and inventive, while still retaining the mélange of punk, old-time, folk and rock for which they've come to be loved.

"We were going for a bit of a different sound, which was exciting," Zezeski says. "We’ve been playing for so many years now that we understand our writing style a lot better. It’s easier to pick up on each other’s mood and whatnot. It’s more natural, for sure, and more fun." The bad news is the van still doesn't run. But the good news is that the music that came from one stroke of bad luck more than makes up for it. Pyramid Theories doubles down on what originally made Mink's Miracle Medicine such critical darlings, while also exploring plenty of new territory, both sonic and extraterrestrial. -- Brittney McKenna 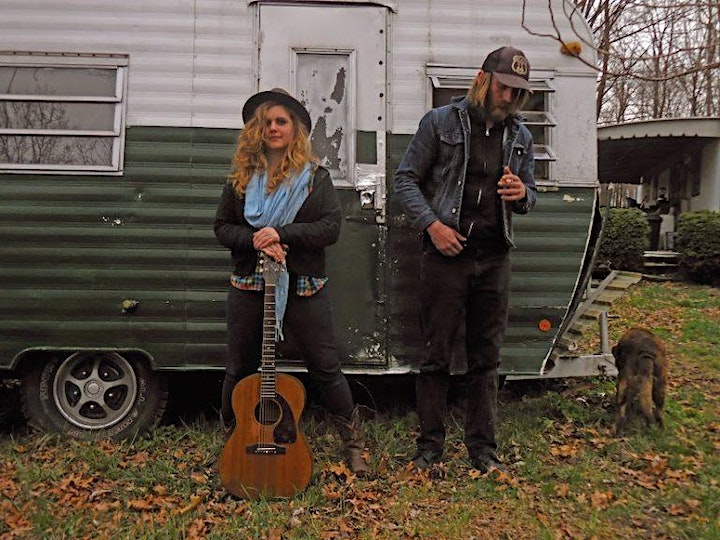