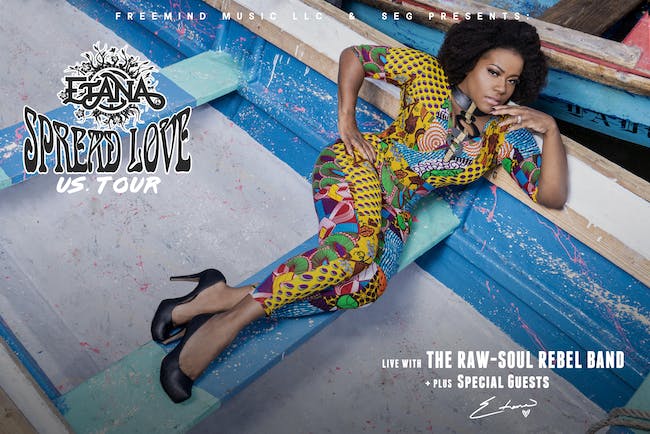 iCal
Google
This show has been POSTPONED. A new date will be announced soon. All tickets for original date will be honored.

Etana’s story begins in August Town, a treacherous but culturally rich garrison community in eastern Kingston that has produced such musical talents as Sizzla and Israel Vibration. Growing up, Etana’s home was filled with music, but it was country and western that she recalls leaving the biggest impression. “Every Sunday was country music day,” says Etana. Etana discovered her talent at the age of 6 while singing at home in the backyard for her aunt. Her charming voice beaconed and huge audience of neighbors who gathered to hear “little Shauna” sing. Etana’s backyard singing led to microphones of local sound systems playing in the neighborhood and thats where he love of music began.

Etana’s family relocated to South Florida when she was nine where she started middle school and sang on the school choir, she was chosen to sing the “Star Spangled banner” at school functions but never thought much of having a career in music at that time. Etana began her music career, almost by accident, while studying nursing at a local community college.

However, music would find her there as well, when she was recommended by a friend to fill in as a backup singer for reggae star Richie Spice.“Being on the road with Richie Spice, I was very comfortable being myself, wearing what I wanted to wear,” Etana recalls of her time touring with the “Earth A Run Red” singer. “Nobody had a problem with my afro.” The gig turned into an unexpected opportunity when Etana was asked to warm up the crowd at a show where Spice was feeling ill. “It was nothing rehearsed, just covers,” states Etana. “But people started to ask: ‘Who was the girl?’ Management for Richie Spice kept asking me to do a song, and ‘Wrong Address’ was the first song that I wrote.”

VP Records, recognized Etana’s talents. In 2008, the label released her debut LP, The Strong One. The album, which combined Etana’s reggae sound with aspects of R&B and world music, was embraced by fans as well as the music industry, landing the singer a nomination in the “best reggae” category at the MOBO Awards in England.

After several years touring around the world, Etana returned in 2011 with her second album Free Expressions. The set included the hit “People Talk,” which detailed Etana’s own experiences facing skepticism as a woman in the music industry, as well as favorites like “Free,” an emotional tear-jerker written from Etana’s personal experience of the violent, horrific nature of her community, having to endure days of no sleep unable to go home because of a turf war and fears of being killed in the cross fire. “August Town” a track written in hopes of reuniting her community.

In 2013, Etana partnered with producer Shane Brown for her third LP, Better Tomorrow, recorded at Kingston’s legendary Tuff Gong Studios. The album brought Etana back to reggae’s foundation via vintage sounds and one-drop rhythms, earning praise from the Associated Press for its “mature and confident sound,” “top-notch lyrical content” and “unique vocals.” The same year, Etana held her own at the IRAWMA (International Reggae and World Music Awards) in Coral Springs, Florida.

Etana continues her forward movement in 2014 becoming the first female to achieve a Reggae Billboard #1 in seventeen years with I Rise, album produced by Jamaican luminary Clive Hunt.

After Etana’s break away from Vp Records, as an independent artist, she continued on her trail firsts to becoming the first female artist out of Jamaica to receive the number one spot of the Reggae Billboard for the second time with her album “Reggae Forever” which was produced by her own label, Freemind Music, and released on march 8th, 2018. The Reggae Forever LP, was also nominated by the Grammy committee, as one of the best Reggae albums of 2018. This nomination made Etana the first female artist from Jamaica in over twenty-one years to be nominated. The other nominees were Shaggy & Sting, Ziggy Marley, Black Uhuru and Protege. In November of 2019, Etana released an eight track EP “Dimension” that debut at #4 on iTunes and #7 on The Reggae Billboard album charts. Etana is currently created album #6 while keeping busy on her upcoming 2020 World Tour.