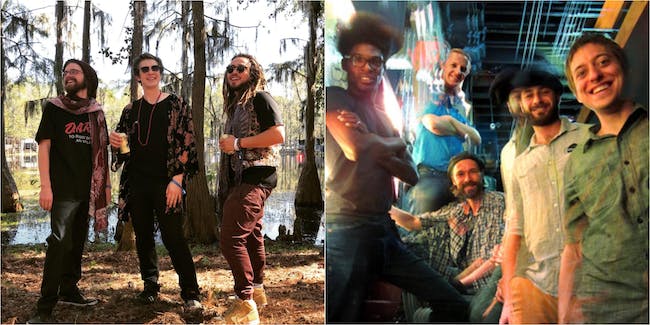 POSTPONED - (originally rescheduled from from 5/14) Evanoff + The Fritz

iCal
Google
This show has been POSTPONED. A new date will be announced soon. All tickets for original date 5/14 AND July 30 date will be honored.

A staple in the Colorado music scene, Evanoff, is a guitar driven live-electronic trio. Defined by a bold live show full of sonic exploration, blending soaring melodies and emotive bass lines.Evanoff continues to be one of the most versatile and dynamic acts in the ever-evolving electronic music scene.

Since 2017, Evanoff has obliterated festival stages all across the country including Electric Forest, Hulaween, Resonance, Euphoria, Joshua Tree, Sonic Bloom, and more. Fueled by Coors Light, Evanoff is only just beginning.

The Fritz is a soul-driven dance rock band hailing from Asheville, NC. The group’s aggressive approach to funk, soul, and rock creates a sound that is uniquely their own. Their high-energy, danceable songs provide a platform for each member to shine. With powerful vocals, climactic solos, and tight grooves, The Fritz has built a devoted following and is captivating audiences everywhere.

Originally formed in the rehearsal spaces of University of North Florida’s School of Music, The Fritz discovered an immediate chemistry. Drawing on influences such as Prince, Talking Heads and Jimi Hendrix, the quintet integrated their diverse musical tastes and began writing music together.

With their college days behind them, the Fritz soon set their eyes on the mountains of Western North Carolina, eventually settling in Asheville in July 2011. After the release of their 2012 debut album, Bootstrap, the band launched into a near-constant touring schedule. With appearances at festivals such as Hulaween, Wakarusa, and Catskill Chill, the band quickly gained a reputation as a live act not to be missed. The band’s 2017 release, Natural Mind, captures a sound that has been years in the making.

“We intentionally waited to go back into the studio so that we could really work on the music and figure out what makes this band special,” vocalist and keyboardist Jamar Woods said. For the new album, The Fritz headed north to More Sound Studios in Syracuse, NY and enlisted the help of producer Dave Brandwein (Turkuaz, Galaxy Smith Studios) and engineers Jason “Jocko” Randall and Jose Varona to assist with the recording process. “We wanted to work with a producer whose work we respected and who we trusted to add a different perspective,” percussionist Mikey “Spice” Evans said. “Dave played an invaluable role in producing our album.” While most of the songs were written in the months leading up to recording, the studio environment allowed for some last minute additions and musical breakthroughs.

“We really wanted to arrange these songs specifically for the studio, which was both challenging and fun for us” guitarist Jamie Hendrickson said. “Now we’re very excited to get on the road and have these songs take on a life of their own.” The band is now taking the album and their unforgettable live performances around the country with the Natural Mind tour.